This Independence day I’d like to reflect on what a wonderful country we are living in with liberty and justice for ALL.
Think about it. Most of the Indian Americans came to the US only 30-40 years ago. Two of our children are state Governors. Another one was in two space missions. One of us is one of the most influential women CEOs of world. Countless of us are CEOs or other very Senior Executives of/at some of the leading US based corporations in the world. Thousands of highly recognized scientists, engineers and doctors. Many billionaires. Countless millionaires. I could go on and on.
I am also very proud of the similarities between the US and India – the two largest democracies in the world. Both were ruled by the British. Both gained their independence with relatively little violence or bloodshed. Like the US, there is liberty and justice for all In India. A woman President, a Sikh Prime Minister, an Italian born head of the most powerful political party, three Muslim Presidents in the past, countless women CEOs, Chief Ministers and Governors, rags to billionaires like Sunil Mittal, Azim Premji, the Ambanis and more.
Yes, a lot of us are very lucky that we have had the wonderful opportunity to have lived in these two wonderful countries.
Let us raise a toast to the USA on its 235th birthday with…

Squeeze lemons. Mix water, sugar, salt and lemon juice and stir till sugar and salt are dissolved. Add ice in tall glasses and pour lemonade mix making sure there is room to add soda. Add soda. Garnish with 2-3 mint leaves and lemon rings as shown. 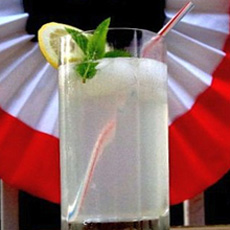